When I heard from Puppeteer Chris Dobson that he had been working on a puppety version of the Children’s classic Five Children and IT, I could hardly contain my excitement at the prospect of finally meeting a Psammead, otherwise known as a Sand Fairy.  One of my favourite books from childhood, since enjoyed by my own children, I couldn’t wait to see this story translated into a piece of interactive theatre.

The Venue – a beautiful, atmospheric, overgrown graveyard, the Abney Park Cemetery, in the heart of Stoke Newington.  The graveyard an inspiration in itself with ivy clad statues, veteran trees, overgrown stone circles and other rambling ruins providing the perfect environment for the show.  We were transported from the city and deep into the countryside to share in an adventure with the players and each and every member of the audience.

The characters of the play appeared and invited us to join them as they ambled through the graveyard.  These vibrant, innocent, endearing and bickering siblings enticed the audience to follow as their countryside adventures unfolded before our eyes.  The sand fairy was discovered early on, he appeared grumbling his way out of the sand, bemoaning the disruption and in spite of the pain in his left whisker he reluctantly granted the children a wish.  ‘Gold’ of course, who wouldn’t, especially when it appears as a pit of delicious chocolate coins to be spent at market – if not demolished on route. 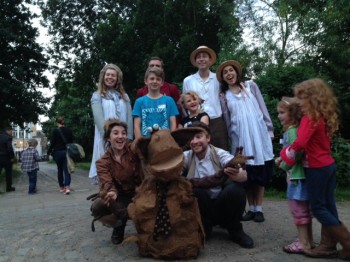 Our cast of excitable children were not the only excitable children in this graveyard; the children in the audience fully embraced the concept of interactive theatre and swiftly became part of the show.  It’s not every Friday night you get set upon by pirates, fight in a pom pom war, spend chocolate money and leave a wish with a Psammead.  This is the stuff that dreams are made of….  The only word whispered by my 11 year old throughout the show was, ‘Brilliant’ he might be too cool to wear the wrong coloured hoody but never too old to enjoy a magical encounter with a Sand Fairy. 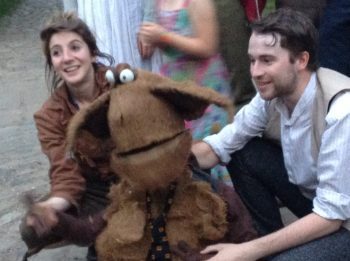 The team at Tea Break Theatre pulled off a magical production, energetically and hilariously acted, all performers rising well to the challenges presented by an over zealous, fully interactive audience.  It was quite a night and as for IT!, IT was wonderful…

Visit Abney Cemetery if you get the chance it’s well worth it.